Skip to content
Previous Next
Forests in Women’s Hands 2021: The Past, Present and Future of Gender Matters in Forestry

Forests in Women’s Hands 2021: The Past, Present and Future of Gender Matters in Forestry

During the first international conference addressing gender equality in the forestry sector, more than 460 participants were able to share their experiences, projects and ideas on gender roles and gender equality and discuss possible measures.

In April 2021, the first international conference addressing gender equality in the forestry sector was held online under the name of Forests in Women’s Hands. More than 460 participants from all over the world attended the two-day online event which was jointly organized by BFW, Forstfrauen, IUFRO and IFSA. The conference focused on international networking among women in the forestry sector.

At the opening, IFSA was represented by Barbara Öllerer, Treasurer and Head of the IFSA FiWH Task Force. She highlighted that gender matters should be taken seriously: “Gender is not only a women’s issue, but it impacts the sector and society on a global scale.”

“Rather than undoing gender, we should be re-doing gender”, said Gun Lidestav from the Swedish University of Agricultural Sciences (SLU) in her keynote and emphasized that in order to achieve change, we have to make the norms and structures of gender and gender roles visible.

In the subsequent panel discussion, women from different parts of the forestry sector shared and discussed their views and experiences on gender matters in forestry. Alina Lehikoinen, as President of IFSA, represented youth in forestry and the next generation of forestry professionals and stated that gender and gender roles should be openly addressed and discussed without fear, starting at universities.

Day 2 focused on dialogue and exchange. In the Online World Café, the participants were invited to formulate and share their ideas, experiences and suggestions on gender roles in the forestry sector and how to achieve changes based on different topics: forest ownership, organizations, education and entrepreneurship, among others. Afterwards, the results of the different discussion rooms were shortly presented in a joined session.

Participants of the world café tables focusing on gender roles in forest education emphasized that courses about gender should become part of the schedule at schools and universities and that a gender-sensitive learning environment can be achieved by raising awareness and by talking about gender, gender roles and gender issues.

At the end, the participants were again able to exchange ideas and experiences in a virtual Information Market while having the opportunity to get informed on different initiatives and networks. IFSA, as one of the organizing partners, also presented the association to conference participants. 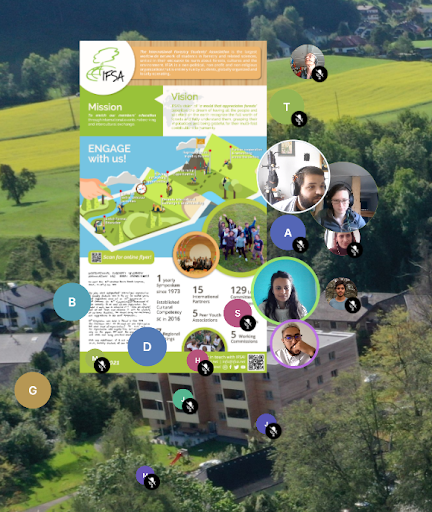 In their closing remarks, the organization team thanked everyone for the extraordinary engagement, the new ideas and the great networking. A word cloud at the end visualized the main aspects the participants took away from the conference: Engagement, Interaction, Discussion, Networking!

As gender matters affect everyone and should be addressed at universities right from the start, IFSA, as a representative of forestry students, is proud to have co-organized the FiWH conference and to have actively participated in building an inclusive world that appreciates forests.

About the Author: Johanna Klapper