It all began in Great Britain in 1973 with an annual meeting of forestry students: the International Forestry Students Symposium (IFSS).

The event was held there for thirteen years and the goal was to provide forestry students with a platform where they could meet their counterparts from other countries, discuss their ideas and views and create an atmosphere of solidarity and inspiration. During the following years the symposium attracted more and more students. The first accomplishment of these meetings was the creation of INFOCENTER; an office established to co-ordinate the exchange of information among forestry students.

During the 18th IFSS in Lisbon, Portugal in 1990, the participants decided to expand the co-operation between forestry students beyond the annual symposium. 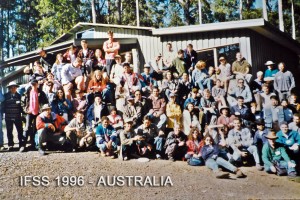 At the constitutional assembly of IFSA, the founding member associations approved provisional statutes and elected the first representative organs. INFOCENTER was relocated and took on the official role as IFSA’s communicative and informational organ.

The following year, the 19th IFSS was organized in the Netherlands. This symposium turned out to be a great success with 112 participants from 38 countries; it was the first time that students from all continents were represented. The following symposium was organised in Italy (1992). Here the third General Assembly (GA) designated a central organ, the Secretariat, to be responsible for the association’s bureaucratic tasks, internal communications and all INFOCENTER duties. The Secretariat, thus, fully assumed its role as IFSA headquarters.

IFSA became a truly world-wide organisation when the new statutes were finally approved in 1994 at the fifth GA during the 22nd IFSS in Switzerland. The association was officially registered as a charity organisation with its seat in Göttingen, Germany. Five years later, with the adoption of the revised Statutes, Decrees and By-laws, the general assembly moved the seat to Freiburg im Breisgau, Germany.