Click on the Interactive image to discover IFSA Structure 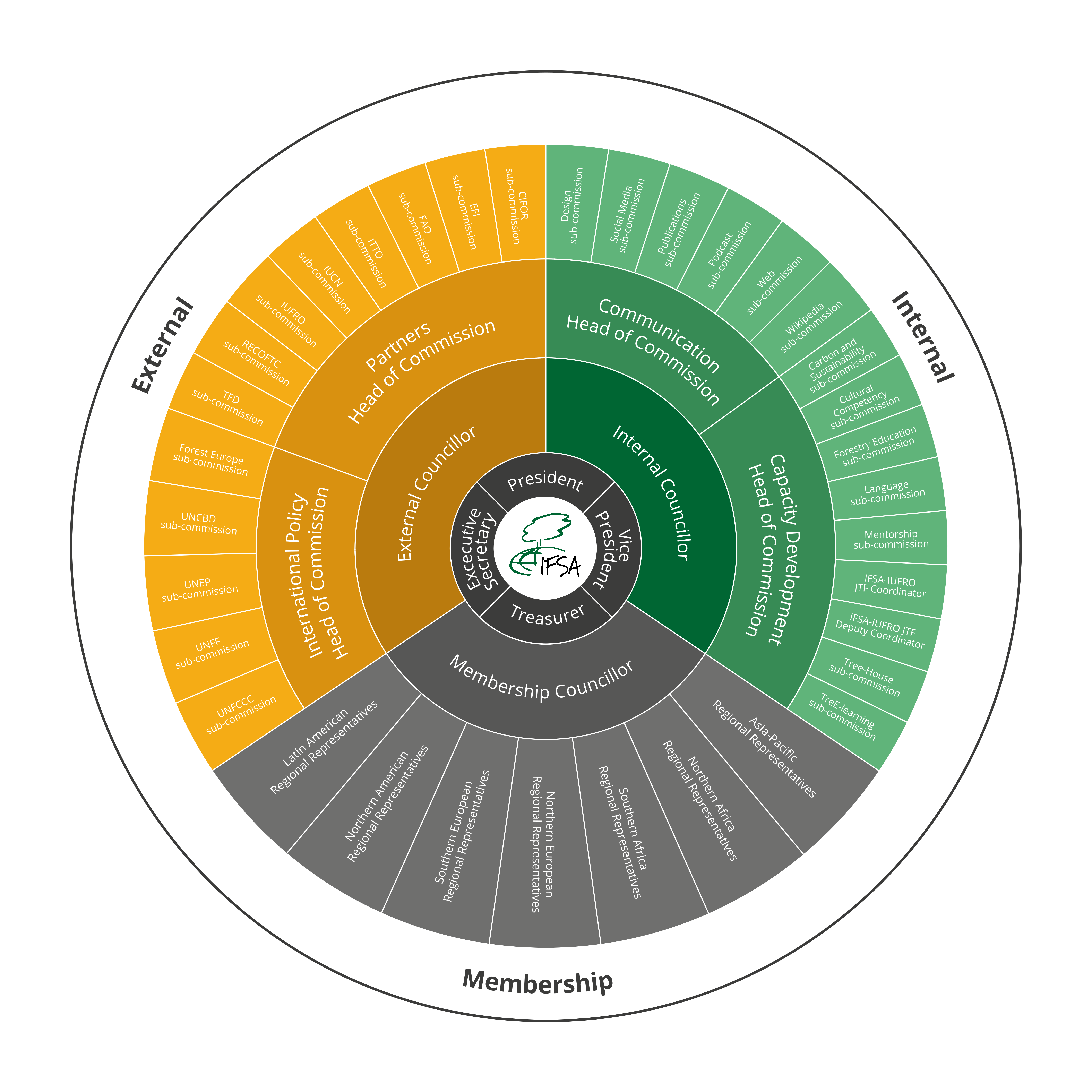 The Vice President (VP) is in charge of the governance of IFSA, while also assisting the President in every decision-making process. The Vice President leads the overall management of the internal departments of IFSA, including any matter related to the members and Regions.

The Treasurer is responsible for all financial matters and ensures the correct and adequate use of the money owned by IFSA. Moreover, the Treasurer handles the communication with the German authorities such as for the non-profit status of the association, or with the registration court and taxation offices.

The Executive Secretary takes care of matters concerning Secretariat, e-mail and archive, but is also responsible for record keeping (such as reports and minutes) and  for the  preparation of the General Assembly.Specifically, it is of fundamental importance the maintenance  of the physical and digital archives and the e-mail correspondence within and outside IFSA.

The Internal Affairs Councilor focuses on overseeing the Communication and the Capacity Development Commissions, while ensuring there is as much communication and coordination among the Council members as possible. The Internal Affairs Councilor is responsible to make certain that operations in the organisation are executed in accordance with the Rules of Procedures and Statutes

Head of Web searches the best user’s experience for the IFSA website, keeping all information up-to-date and re-thinks the website’s format. The head of Web works together with Design and Publications to integrate their content on the webpages. Content published on the website is then often communicated to the social media platforms of IFSA.

Head of Designs plans, designs and communicates social media cards, brochures, banners and reports using the IFSA branding, and works on the visual identity of IFSA.

Head of Publications is in charge of the news shared on the IFSA platforms. The main task is reviewing and publishing all the news from the IFSA network and curate the monthly IFSA Newsletter

Head of Forestry Education strives to inform IFSA members on the Higher Education opportunities that exist worldwide. Following this aim, a series of webinars featuring both foreign students and program developers in inspiring universities around the globe has been launched. Thanks to this, IFSA contributes to increasing student mobility and improving the visibility of global forest programs.

Head of Carbon and Sustainability Sub-Commission

Head of Language promotes and encourages learning foreign languages mainly through the Language Exchange School, a language-tandem programme. The language taught/learned is linked to the language of the IFSS organizing country.

Head of Cultural competency inspires a new IFSA culture with respect to diversity and intercultural understanding through the creation of training programs and learning material for IFSA events, such as guidelines on cultural sensitivity for meetings’ organizing committees.

Head of Mentorship facilitates the integration of mentorship programs in IFSA delegations and a new mentoring program for IFSA officials - consulting members.

IUFRO-IFSA JTF Coordinator and Deputy Coordinator ensure the liaison with the International Union of Forest Research Organizations (IUFRO). This partnership increases training opportunities on needed competencies for IFSA members. The JTF collaborates with the Head of Forest Education.

IUFRO-IFSA JTF Coordinator and Deputy Coordinator ensure the liaison with the International Union of Forest Research Organizations (IUFRO). This partnership increases training opportunities on needed competencies for IFSA members. The JTF collaborates with the Head of Forest Education.

Head of Tree House Commission manages the development and the promotion of the “Tree House” platform, an online platform where you can search for IFSA members hosting others. The Head of Tree House Commission supports members who would like to use the platform either as host or traveller, and ensures member engagement by regularly updating the website and information on how to use the platform throughout communication channels.

The External Affairs Councilor assists in coordinating IFSA’s external partnerships and processes with the President, and oversees the International Policy Commission and Liaison Officers.

The FAO is a specialized agency of the United Nations which operates in more than 130 countries worldwide. FAO’s goal is to achieve food security for all and make sure that people have regular access to enough high-quality food to lead active and healthy lives. The agency consists of four departments specialized in various essential topics such as agriculture, fisheries, aquaculture, climate, biodiversity, and forestry.

IFSA and FAO have a strong relationship which is defined by a Memorandum of Understanding (MoU) that ensures the involvement of IFSA members in a wide variety of events all year long. The FAO’s commitment to supporting the growth of the partnership with IFSA is seen through participation of IFSA members in various events, such as the biannual statutory body meeting Committee on Forestry (COFO), the annual International Day of Forests (IDF) event, and Regional Forestry Commissions, which often feature an IFSA side sessions and a delegation of several students acting as observers.

The main responsibility of HoSc is to communicate and collaborate with the UNFAO closely and create strong engagements.

The International Union for Conservation of Nature (IUCN) brings together the world’s most influential organisations and top experts in the environmental sector since its establishment in 1948. It is the first global environmental union, convening more than 1400 non-state and state organizations, as well as uniting more than 16,000 voluntary scientists and experts. IUCN is one of the pioneers of “nature-based solutions”, and promotes conservation as well as climate action in several ways on a global scale through ground-based projects and research. IUCN also has the Young Professional Network (YPN) providing opportunity for young professionals to present their vision to the world.

As a promoter for the conservation and restoration of ecosystems, IUCN and IFSA share many objectives, from the protection of our biodiversity to climate change. It is no coincidence that IFSA’s vision “A world that appreciates forests” and IUCN’s vision, “A just world that values and conserves nature” align perfectly. The IFSA IUCN partnership is in their baby steps and there is a long way to go.

The HoSC IUCN is responsible for collaboration of IFSA, IUCN and IUCN YPN and would also work actively in the Workshop IFSA will hold at the IUCN World Conservation Congress.

Head of IPC is responsible for the coordination and preparation of IFSA’s contribution and delegations to forest related political processes and United Nations (UN) functions outlined below. The commission is also a forum for the discussion and exchange of opinions on forest policy and conduit for forest students to increase engagement with national policies. Each of the six sub-commissions support a dedicated process or a UN Agency.

FOREST EUROPE is the brand name of the Ministerial Conference on the Protection of Forests in Europe. It is the pan-European voluntary high-level political process for intergovernmental dialogue and cooperation on forest policies in Europe. FOREST EUROPE develops common strategies for its 47 signatories (46 European countries and the European Union) on how to protect and sustainably manage their forests.

IFSA is a recognised observer of the FOREST EUROPE process which involve a wide range of stakeholders, for instance, environmental and social NGOs, forest and landowners’ federations, forest industry and the scientific community. Through the partnership, IFSA regularly engages closely and actively participates in events and meetings held under the FOREST EUROPE process, as the Ministerial Conferences, Expert Level Meetings and Round Table Meetings. Oftentimes, a small delegation of IFSA students is travelling throughout Europe to follow the developments in forest policy. Here, IFSA plays an important role in representing the opinion of the youth in forestry in the FOREST EUROPE process.

The HoSC is responsible for this detailed interaction and implementing IFSA'S mission and vision in Europe.

The establishment of the Convention of Biological Diversity (CBD) has resulted from an increasing focus of international politics on human-environmental interaction. As one of the three so-called “Rio-conventions”, its founding follows an international agreement signed by all members of the UN, concluding the Earth Summit in 1992.

IFSA is a registered observer organization at the CBD, As IFSA and convention share similar views on protecting biodiversity and promoting sustainability, IFSA provides opportunities for passionate youth to attend the COP. IFSA is also part of the youth constituency of GYBN and collaborates with them regularly.

The HoSC is responsible for working out delegation and involvement of IFSA in UNCBD and YOUNGO. For more visit https://ifsa.net/partners/uncbd

The partnership between UN Environment and IFSA was only initiated in 2017 and has been growing stronger ever since. Being the leading global environmental authority with several forest-related sub-bodies, such as the UN-REDD Programme and the Global Peatlands Initiative, UN Environment is a key partner for IFSA.

IFSA is an active member of the United Nations Major Group of Children and Youth of UN Environment, and contributing to several initiatives of this official youth constituency.

The major work for the HoSC would be actively taking part in MGCY meetings, event, create scope for IFSA in UNEA (United Nations Environment Assembly, held every year) through this partnership collaborating with UNFF HoSCs and their guidance.

The United Nations Forum on Forests (UNFF) was established in 2000 in order to promote principles for sustainable forest management and explore the possibility of an international agreement on forestry. Civil society is a central element of the UNFF and crucial for the implementation of the UNSPF and the GFGs. Within the forum, several ‘Major Groups’ are the formal constituencies to engage civil society. The UNFF Major Group of Children and Youth (MGCY) is led by the IFSA and represents a central stakeholder group within the forum. In 2018, IFSA established the formal work plan for the years 2018-2020 to accelerate youth’ contributions. The HOSCs of UNFF Subcommission, responsible for implementing the work plan hence play a pivotal role in designing IFSA'S position internationally and provide guidance for the entire IPC. Know more at https://ifsa.net/partners/unff

The United Nations Framework Convention on Climate Change (UNFCCC) is an international environmental treaty of United Nations that was created as one of the outcomes of the Rio Earth summit in 1992 to give countries of the world a common forum in which to discuss measures to take on climate change. IFSA has an official observer NGO status in the Convention and sends delegations to the Conference of Parties (COP), REGIONAL Climate Weeks and various other UNFCCC events every year. IFSA has also been invited to high-level side-events to speak about youth and forestry and has hosted its own workshops in the past. IFSA IS also part of the youth constituency of YOUNGO that has its own yearly conference called the Conference of Youth (COY).

The HoSC is responsible for working out delegation and involvement of IFSA in UNFCCC and YOUNGO. For more visit https://ifsa.net/partners/unfccc

The membership councilor focuses on coordinating regional action and overseeing the Regional Representatives. Important task is to represent the interests and needs of the Regions balances in the decisions taken by the Council.