Skip to content
Previous Next
GLF BDC: Reconnect Back to Roots 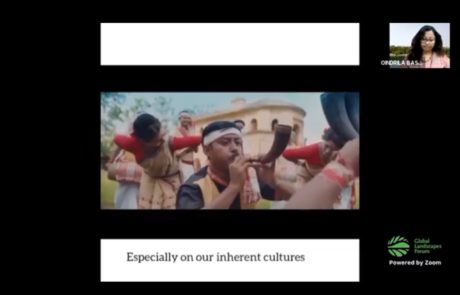 “Let’s tune in.. with nature! Cultures around the world connecting back to their roots” IFSA event in the GLF Biodiversity Online Conference.

Global Landscapes Forum brought people all around the globe together for a cause : One World One health. Our natural ecosystems inspire us culturally. They are the source of healthy life and well being.  IFSA with support and collaboration from Youth in Landscapes Initiative organised the Youth Daily Show titled “Let’s tune in.. with nature! Cultures around the world connecting back to their roots” on 29th of October. The entire show had IFSA contributions in varied aspects. Ms. Tisha Ramadhani, an Indonesian Forestry Graduate serving Germany-based Fairventures Worldwide FVW as Community Relations Officer in Indonesia, and Mr. Alex Onatunji, IFSA-IUFRO Joint Task Force Coordinator* from Nigeria, were the amazing speakers. Ms. Oindrila Basu, a masters in Forestry from Forest Research Institute India, a young researcher on Mangroves of Sundarbans from India moderated the show. All of them are part of the IFSA Community.

The show addressed relevant questions on the role of biodiversity in our culture, the changing landscape and values with urbanisation, the importance of green spaces in the urban environment and the responsibilities of youth in “building back better”. The 30 minutes of engaging perspectives concluded with the importance of action, from changing daily habits to transforming societies and landscapes, for a sustainable future. While the youth with energetic awareness are taking the lead, they need trans-generational support in the form of knowledge, tools, direction and finance to bring values of nature back in practice. The youth needs platforms to share and actively participate in the process and experience the change. At the same time, adult-education and awareness to unlearn and relearn to reconnect to our roots are urgent for people from all communities. Youth of Forestry and Allied practices has a huge scope, opportunities, power and responsibility in rebuilding the values that appreciates Forests, Wildlife, Biodiversity and reconnects humans back to their roots, the Nature.

GLF Provided 10 free tickets to event contributors to attend the Conference apart from the 20 free tickets to IFSA Youth. GLF BDC was an amazing experience, said Annie Biju, President of IFSA LC FRI. She added how the event helped her to meet new people, learn new things and broaden her horizon. Yojurved, a young contributor, again believes in the motto of one world by attending GLF Biodiversity meeting, one vision for working for the environment. He believes more such sincere discussion with the Youth will lead us to a healthier and sustainable future. Esha, an IFSA participant from Asia-Pacific, left the amazing, informative and engaging event being inquisitive and cravings for more such meaningful youth interactions again. Diksha, another IFSA attendee of the event shared how this conference reminded us that all cultures across the globe teach us to protect nature whereas we humans grow up to forget these values swayed by the shiny illusion of modernisation. She hopes the efforts of this conference would help shape better policies by global policy makers.

As IFSA GLF Biodiversity event Coordinator, I, Oindrila Basu from IFSA LC FRI India, was part of the GLF journey to biodiversity and attended all the Webinars which were engaging, inspiring and valuable.

Tisha currently serves as the Community Relations Officer at Fairventures Worldwide GgmBh; Alex is a student in Erasmus Mundus Master Programme MEDFOR. The two young foresters work in the field of human-nature interaction in two different places, Tisah in Kalimantan, Indonesia, and Alex in Lagos, Nigeria.

Tisha found the Indigenous people are not connected to nature as they were since people are migrating to cities for jobs and better resources. Their children used to spend hours playing in forests; however, due to urbanization and deforestation, it is no longer to be seen. As to the rapid environmental change, people are not used to the polluted rivers and wonder why their children get sick after swimming in the same river they used to play in.

Both of them are not negative to a digitalized world. Alex thinks the technologies decrease the travel cost and carbon footprints with more online meetings take place, and people around the globe are connected by the Internet. Tisha is less optimistic and thinks how people use these technologies causes a big difference.

As a young female working on environmental issues, Tisha’s biggest challenge is that she needs to arm herself to fight against the local powers. Alex, as an educator, was asked about targeting the youth or adults when promoting concepts of biodiversity. He replied that he will focus on the youth as they are the future leaders.

Find out more about the event: https://events.globallandscapesforum.org/biodiversity-2020/

(This article is written by Yuyo Yeh, Head of Publication Sub-Commission.)

About the Author: Yuyo Yeh