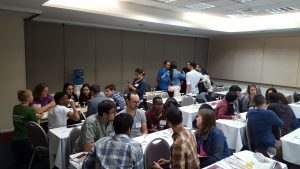 [Curitiba, 28.09.19] Over 40 international students are gathered today in the lead-up to the World Congress of the International Union for Forest Research Organizations (IUFRO) in Brazil, to learn about forest entrepreneurship and scientific writing. The workshop is part of IFSA’s extensive engagement in forest education and its key role in the upcoming World Congress. Throughout the week, IFSA is hosting a sub-plenary on “Green Job and the Future of Forest Employment” (building on the work of the IFSA-EFI-IUFRO green jobs project) as well as leading the students’ engagement through a series of events. This includes the facilitation of a three-parts mentoring programme, designed to build peers and professional networks and promote students’ involvement with IUFRO, the hosting of numerous technical sessions and further workshops for ongoing capacity building.

“The IFSA programme provides an opportunity for students and early career professionals to build practical skills, share their knowledge and expand their networks” said Sarah Dickson-Hoyle, former Head of Forest Education and Training Sub-Commission. “This provides a strong foundation for their active participation in the congress and their future research careers.”

The events are jointly organised by the IFSA-IUFRO Joint Task Force on Forest Education and the CapacityDevelopment Commission of IFSA. The IFSA-IUFRO Joint Task Force on Education is a collaborative effort by the two organizations to address key emerging topics in forest education by bringing together the perspectives of non-governmental organizations, researchers, and students. Activities of the Task Force include the Global Outlook on Forest Education (GOFE), the facilitation of trainings to build capacity as well as the support of the Global Forest Information Service (GFIS).

We thank the Stihl Foundation Germany, and the IUFRO Presidents’ Grant, for supporting the IFSA delegation to the IUFRO World Congress.

The IUFRO World Congress is a pinnacle forestry event that brings together thousands of scientists policy makers and civil society organizations to discuss major topics on the international forestry agenda. The congress also attracts a large number of students and young researchers who represent new and innovative thinking and the future forest management.

About the Author: Maximilian Schubert